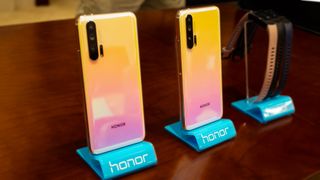 Honor phones and a smartwatch at IFA 2019. Deloitte estimates that the market for smartphone accessories will be worth $77bn in 2020
(Image credit: Future)

It’s no surprise that the smartphone industry makes a lot of money – after all, many of us buy a new device roughly every two years, far more often than a new PC, TV or games console. However, the rest of our spending is a little surprising.

Deloitte’s Technology, Media and Telecommunications group recently released its 2020 Predictions paper looking at the state of the tech market, and there are some pretty surprising findings and predictions contained.

Deloitte estimates that in 2020, the smartphone market will be worth $484bn, eclipsing the combined $169bn for PCs, $117bn for TVs, $25bn each for tablets and wearables, $15bn for games consoles, $9bn for smart speakers and $7bn for VR sets.

That shows almost three times as much money is spent on smartphones as its nearest competitor. Another huge surprise is games consoles, as although they only cost around the same amount as a phone yet are released far less frequently, they’re still much more of a small fry in the grand scheme of tech hardware than most people realize.

However, there’s another category that Deloitte examined, and which, coming in at $77bn, trumps all but phones, PCs and TVs. So which product area is it that’s worth more than games consoles, wearables, tablets and smart speakers combined? It’s something you might not expect: smartphone accessories.

Simply put, smartphone accessories are things you buy to complement your handset experience. In broader terms they include wearables and smart speakers, which aren’t part of the $77bn, but also headphones, battery packs and chargers, cases and other small peripherals, all of which are included in the figure. Analysts call this the ‘smartphone multiplier’ market.

Deloitte’s projected growth for these products is based on the constant innovation in those areas, which in turn fuels demand: the trend towards wireless headphones, for example, means people are spending more on high-tech cans; and with numerous types of headphones now available, many people own multiple pairs for different activities like commuting, relaxing, and working out.

And, now that most phones (and many phone accessories) use high-speed USB-C charging, new and improved portable power packs and chargers are needed to keep devices powered up. Deloitte estimates that over half of all people in ‘developed countries’ own a portable power bank, with the market for these indispensable products alone exceeding that of the entire games console hardware industry.

And then there’s the app market…

If you think that’s a lot of money being spent on smartphone accessories and hardware, just wait until you see the numbers for software. Deloitte predicts that in 2020 some $118bn will be spent on smartphone, smartwatch and tablet apps.

Three-quarters of these apps are being bought on the Google Play Store and the Apple App Store; the rest are split between own-brand app stores from smartphone manufacturers, and a range of other stores, particularly in China, which has around 300 digital app stores.

And what apps are most people buying? Overwhelmingly, it’s games, which are expected to make a whopping $80bn in 2020, or just over three quarters of the total amount spent on apps. This figure includes both paid-for games and free games that include in-app payments – so all that cash you dropped in Candy Crush counts.

Deloitte expects this trend to grow thanks to the number of dedicated gaming phones hitting the market, despite the fact that Apple Arcade and Google Play Pass could make mobile gaming a lot more affordable.

It’s worth pointing out that subscriptions to services like Spotify and Netflix aren’t included in that $118bn figure, although Deloitte estimates music and video subscription services to be $10bn and $8bn industries respectively.

The world gets more mobile

The huge amount of money expected to be spent on smartphones, smartphone accessories and smartphone software shows how the world is becoming increasingly mobile, with people consuming more and more entertainment and information through their phone, rather than buying separate devices like gaming consoles, cameras, and TVs.

It’s worth pointing out that Deloitte expects there to be a slight decline in smartphone sales in coming years, as there’s only so much more innovation that can take place before the devices become as good as they can realistically get. In addition, the analysts don’t expect 5G phones to be as big a boon to the phone industry as some think they’ll be, because the benefits of the next generation of connectivity are limited.

At the moment, however, the only way seems to be up, for sales of both phones themselves, and everything else you need to make your mobile experience great.

How to watch Strictly Come Dancing 2019 Final online for free: stream from UK or abroad