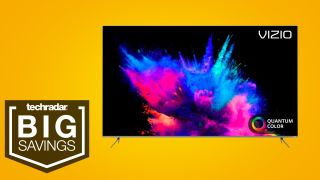 Want to get the cinema experience in your home this Black Friday? The deals season hasn’t even officially kicked off yet, but the early Best Buy Black Friday sales have offered up a huge deal on giant Vizio P-Series screens.

Best Buy is knocking $500 off the 75-inch Vizio P-Series Quantum TV, bringing it down to an incredible $1499.99, putting a giant screen into the real of affordability for even the average movie fan:

With pin-sharp visuals, the Vizio screen offers a 240Hz refresh rate for super-smooth motion, perfect for watching sports with.

Quantum Color control keeps the screen looking vibrant without being over-saturated, while the 1200 nits of brightness, paired with 240 local dimming zones and Dolby Vision HDR visuals, lets brightness and contrast balance for deep and rich shadows in scenes.

As for connectivity, not only do you get Apple AirPlay and Chromecast built in for streaming from your mobile device, but also Google Assistant, Alexa and Siri voice control.

And, if you’re after something a little more modest, you can knock 10-inches (and a couple of hundred dollars) off the above TV with this equally-tempting Vizio P-Series at 65-inches: