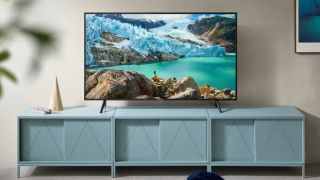 Need a new 4K TV?  These amazing Black Friday TV deals from Currys have got even better, with prices dropping further and further.

The deal is for the Samsung RU7020 4K LCD TV – dropping an outstanding £400 on the largest model, and bringing top savings for the smaller options.

We recently reviewed the 43-inch model, awarding it a coveted four out of five stars for its impressive colour and motion-handling, efficient scaling, and outstanding operating system, which gives you access to Apple TV,  Netflix, Amazon Prime Video, YouTube, and all the other streaming platforms you could want.

These 4K TVs even work with Amazon Alexa or Google Assistant, allowing you to control your television with your voice alone using a compatible smart speaker.

While the remote control could be better, and the sound quality won’t blow you away, these great Currys Black Friday deals mean that you’ll have money left over to treat yourself to a new soundbar.

Samsung UE43RU7020 4K TV: £229 at Currys
Looking for a 4K TV that doesn’t take up your entire living room (or empty your bank account?) This 43-inch model from Samsung is a great choice – and with £80 off, it’s a bargain in the Currys Black Friday sales.View Deal

Samsung UE65RU7020 4K TV: £599 at Currys
The savings keep getting better – this 65-inch Samsung 4K TV is currently £150 off the RRP in this brilliant Black Friday deal. With Amazon Alexa and Google Assistant compatibility, it would almost be rude not to buy a soundbar with that money you’ve saved.View Deal