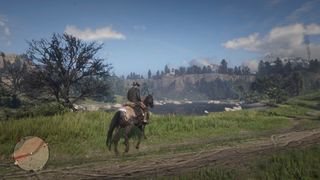 One of the best things about Red Dead Redemption 2 on PC is its ability to run at ultra-high resolutions that games consoles can only dream of, so we ran it at 8K resolution to see how it runs.

The results aren’t entirely surprising: a powerful gaming rig with a $2,499 (around £2,000, AU$3,600) Nvidia Titan RTX graphics card struggling to run the game at a playable frame rate.

However considering just how much of a visual treat Red Dead Redemption 2 is, we were expecting a lot worse performance, with the game at 8K essentially being a (very) pretty slideshow. In fact, the game wasn’t too far off being playable at the huge 7,680 × 4,320 resolution.

We played the game using a very powerful gaming PC provided by Chillbast, along with Dell’s UltraSharp UP3218K monitor. Checkout the boxout on the right for the full spec of the PC we used.

The PC Chillblast built for us is an absolute beast, and includes the RTX Titan GPU, currently the most powerful consumer graphics card you can buy. We say ‘consumer’, but with a huge 24GB of GDDR6 video memory and a whopping $2,499 price tag on its own, it’s not a GPU that you’ll find in many rigs.

At 8K resolution with all the settings whacked up to full, Red Dead Redemption hit 18.65 frames per second on average in the benchmark. While it looked good, it also resulted in very choppy performance, and well below the 60 frames per second (or above) we’ve come to expect – nay demand – of the best PC games.

We also played it for a while at 8K, and while it wasn’t the complete horror show we were expecting, it did feel very sluggish. But it really did look fantastic.

We then set all the graphical settings to low, and the game ran at a much better 26FPS, but still well below what we would want to play at for long – even though we did see a few spikes where the framerates hit 60FPS.

So, once again 8K proves to be too taxing for even some of the most powerful hardware in the world right now.

However, playing the game at 4K at Ultra settings we got 52.64FPS. This is much more like it, and way above what the PS4 Pro and Xbox One X are capable of.

While it’s still a bit below the magical 60FPS mark, it’s not that far off, and with a bit of tweaking to some of the more intensive graphical effects, we hit 4K at 60FPS pretty easily.

It’s also worth noting that the visual fidelity didn’t improve much going from 4K to 8K – certainly not enough to warrant the drop in performance. This is because while Red Dead Redemption 2 has been made with 4K in mind, with textures aimed at that resolution, because people playing it at 8K will be so rare, the assets haven’t been created to take advantage of 8K.

So, even by ‘dropping’ down to 4K, we still got one of the best looking PC titles ever. But playable 8K still remains a dream at this point.

Check out our other Red Dead Redemption 2 PC performance tests to see how the game fared on more realistic hardware.

Dyson deals at Walmart: save $100 on the Dyson V7 Vacuum during Cyber Week