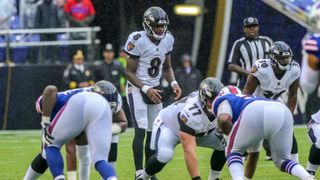 We’ve made it all the way to week 14 of the 2019-20 NFL season and this weekend you’ll get to see the Baltimore Ravens go up against the Buffalo Bills. This is a game you won’t want to miss as Ravens quarterback Lamar Jackson is just 63 yards away from breaking the all-time single season rushing record held by Michael Vick. We’re here to make sure you catch every minute of today’s game – see how to get a Ravens vs Bills live stream regardless of where in the world you are.

Baltimore Ravens vs Buffalo Bills – when and where?

The Baltimore Ravens will face off against the Buffalo Bills at the 70,000 New Era Field in Orchard Park, New York.

Baltimore is going into today’s game 10-2 and the Ravens are hoping to add another win to their eight-game winning streak. The team slipped up a bit during weeks 3 and 4 when they suffered back-to-back losses against the Chiefs and the Browns but they have certainly turned things around since then. The Ravens currently hold the top spot in the AFC North but in today’s game they’ll be facing a team with a top-tier pass defense. Can the Ravens keep their winning streak going or will the Bills put an end to their impressive run?

Buffalo meanwhile is entering today’s game 9-3 but the team has won its last three games against the Dolphins, Broncos and Cowboys. During their Thanksgiving game against the Cowboys, the Bills earned a 26-15 victory with placekicker Stephen Hauschka scoring two field goals while Cole Beasley, Devin Singletary and Josh Allen all managed to score touchdowns. The Bills are currently in second place in the AFC East just behind the Patriots and a win today could go along way to helping the team secure a spot in the playoffs.

Whether you’re a Ravens fan in Baltimore, a Bills fan in Buffalo or just want to tune in to hopefully see Lamar Jackson beat the single season rushing record – we’ll show you how to get a Ravens vs Bills live stream regardless of where in the world you are so you don’t miss a single play.

But if you’re somewhere else in the world – or if a coverage blackout is stopping you from watching in the US – then there’s still a way you can live stream the Ravens vs Bills online (and you don’t even have to slum it with a grainy, illegal feed you’ve found on Reddit). Instead you could use a VPN – or Virtual Private Network – to change the IP address to one in a different state or country which does have a stream. And it’s not even hard to do.

How to watch the Ravens vs Bills in the US

If you live in the US and have a television, you’ll be able to watch this NFL game as it airs on CBS. The network will show today’s Ravens vs Bills game at 1pm ET / 10am PT. CBS will also stream today’s game on its own streaming service, CBS All Access which costs either $5.99 or $9.99 per month depending on whether you choose the option with or without commercials.

Not interested in paying for an expensive cable TV subscription just to watch the NFL this season? Don’t worry as there are now a variety of different streaming services, all at different price points, to help you watch this game. To make things easier for you, we’ve listed a few of our favorite NFL streaming options below.

How to stream Bills vs Ravens live in the UK

If you plan on following your favorite NFL team all the way to the Super Bowl this year, then your first option should be NFL’s International Game Pass as it allows you to watch every regular season game for £143.99 or just 50p per game!

Unfortunately it looks like Sky Sports won’t be showing today’ Ravens vs Bills game so NFL Game Pass is your best bet to watch this game in the UK.

While TSN is showing a number of NFL games on TV this season, unfortunately the network won’t be showing today’s Ravens vs Bills game.

However, the streaming service DAZN will show today’s game and its coverage will begin at 1pm ET / 10am PT. With DAZN you can stream this game online, on mobile or using your favorite streaming devices as the service supports Apple TV, Chromecast, Amazon Fire TV, Android TV, Roku, Xbox One and PS4. It costs $20 a month or $150 per year but there is a FREE TRIAL available if you want to check it out for yourself to watch the Ravens vs Bills.

Live stream Ravens vs Bills in Australia for free

If you’re an avid American football fan and you even want to watch the games that aren’t broadcast on television in Australia, then you need to know about the International Game Pass. It’s the obvious first option that will let you view all regular season games for AUD274.99.

You can also watch today’s Ravens vs Bills game on 7Mate and the network’s coverage of the game will begin at 5am AEDT.