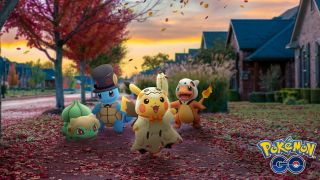 Pokémon Go: the world’s first augmented reality app to become a household name. Niantic’s mobile AR game is still going strong two years after it first released, with a constant drip of events and updates keeping budding trainers glued to their phones and pounding the streets.

And while it hasn’t managed to top the peak of its popularity in 2016, it’s still going strong and finding plenty of new ways to improve its player experience.

So what’s the latest news for Pokémon Go? As you’d expect, brand new features are being added all the time and community events are still going strong. Plus we have some more themed events and brand new Gen 5 Pokémon to catch!

But without further ado, here’s our guide to all the latest Pokémon Go news and updates.

Niantic has announced that its Wayfarer tool is now accessible to Pokémon Go players level 40 and above. This tool allows players to submit nominations for Gyms and Pokéstops, giving them a say in new places to play. All players are now able to review nominations.

Sick of running out of space for all your Pokémon? Good news: Niantic has upped Pokémon Go’s in-game storage space. Now, players can store up to 3000 Pokémon and 2500 items. Unfortunately the extra capacity isn’t free—an extra 50 spaces for items or Pokémon will cost 200 PokéCoins.

Pokémon are appearing in more places

Niantic has confirmed that Pokémon are now more evenly distributed around the world. In areas that have had dense Pokémon population, players are likely to find them more spread out, while in areas where the population of Pokémon was sparse or even non-existant creatures will now appear more.

What’s the next Pokémon Go Event?

Pokémon Go is celebrating the festive season with its chilly Holidays 2019 event which will run from December 24 until January 1 2020. During the event, Pikachu, Raichu and Pichu will appear in special costumes while more ice-type Pokémon will appear in the wild. The adorable ice-type bear Cubchoo will even make its Go debut along with Cryogonal, which you’ll have a chance of meeting when you use a Glacial Lure Module.

Alolan versions of Sandshrew and Vulpix as well as festively dressed Stantler and Pichu will hatch from 7km eggs while costumed Stantler and Raichu will appear in two-star Raids. As ever there’ll be event-themed Field Research Tasks which will give you the chance of encountering themed Pikachu and you can expect to see new Shadow Pokémon to save.

Across the full event there will also be bonuses to enjoy which include the ability to open and carry twice as many gifts each day and one free single-use incubator for each day so that you can hatch more eggs. Each day will bring an additional bonus and you can check up on these here.

In the midst of the Holiday Event is a special December event on December 28 from 11am to 7pm local time.

During this event Glacial Lure Modules will last two hours, drawing in Pokémon like Lapras, Delibird, and Cubchoo. You can also use the Glacial Lure Module to evolve Eevee during the event to get a Glaceon that knows the Charged Attack Last Resort.

Regice the Iceberg Pokémon will return to Raids and there will be two additional Raid Passes released when spinning a Photo Disc at a Gym to give you a better chance of catching it.

Niantic is celebrating the end of 2019 with a long Community Weekend in December. Taking place over December 14 and 15, from 9am to 9pm, the event will see an abundance of exciting encounters and Raids. It’s also worth noting that Community Day exclusive moves from 2018 and 2019 will be available again across the weekend.

On this day, players will be more likely to encounter Totodile, Swinub, Treecko, Torchic, Mudkip, Ralts, Slakoth, Trapinch, Bagon, Turtwig, and Chimchar in the wild. In Raids, on the other hand, Bulbasaur, Charmander, Squirtle, Pikachu, Eevee, Dratini, Chikorita, Cyndaquil, Mareep, Larvitar, and Beldum will be more common.

Although the above takes place between 9am and 9pm, between 11am and 2pm players will be able to enjoy additional bonuses such as double Catch Stardust, double Catch XP, and half the Hatch Distance for Eggs.

On December 15 the Pokémon appearing more commonly in Raids and in the Wild remain the same but when it comes to Eggs, things are slightly different. Players will be more likely to hatch Squirtle, Eevee, Chikorita, Cyndaquil, Mudkip, Ralts, Trapinch, Beldum, Turtwig, and Chimchar.

The 11am to 2pm bonuses are just the same too.

In a recent blog post, Niantic has discussed some of the recent improvements it’s made to its AR technology—improvements which could see you interact with your favorite Pokémon using the AR camera. Provisionally titled Pokémon Go Buddy Adventure, this new mode would make it possible for players to see and interact with their Buddy Pokémon via the game’s AR camera. Even more impressive, players would also be able to see their friends doing the same thing, making it a multiplayer experience.

The mode would be cross-platform, meaning it doesn’t matter whether or not you’re an Android or iOS user, and though there’s no release date just yet, Niantic has said that it’s coming “in the months ahead”.

Niantic has announced that a new feature called GO Battle League will be coming to the game in early 2020. It will build on the current trainer battles system and will encourage players to get out and explore. According to Niantic, players will walk to earn entry into the Battle League. Once they’re in they’ll be able to battle players from around the world through an online matching system. Win and lose, they’ll rise and fall in the ranks of the worldwide league. We’ll keep updating with more information on Battle League as it’s announced.

Want to buy yourself a Pokémon Go Plus wearable? Check some of today’s best deals down below.

These Linux browsers are being banned from Google services