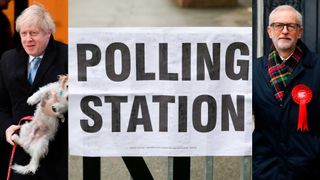 So this is it. After all the campaigning, debates and manifestos, the race is run and the results of the 2019 UK General Election are almost ready to be revealed. Below, we’ve explained all your options to watch the 2019 General Election online – regardless of where in the world you are – to find out what happens next and who will be running the UK for the next few years.

It’s election day! Although coverage will run all day, polls will close at 10pm, this will be when the majority of the results coverage will get going.

Coverage of the results coming in will air on a few different channels – you can see a full list of channels below.

Despite the usual gap between General Elections being five years, it is just two years since we last experienced one – doesn’t time fly! But of course, for anyone wanting to know the results as soon as they happen, you’ll be wanting to watch the General Election online.

With polls closing at 10pm, a number of news channels will be covering the election results, giving live commentary, exit polls, interviews and analysis of the event as it happens.

No matter what kind of coverage you’re looking for, read on to see how to watch the General Election online. And if you happen to be abroad or out of the country when it airs, you can see details on how to live stream it below.

Watch the General Election online for free in the UK:

If you’re trying to watch the General Election online then you have a few choices for where to go. A number of broadcast channels will be covering the results with special guests appearing on each one. We’ve listed your choices below.

BBC:
If you’re looking for some more serious coverage of the election results, the BBC might be your obvious first choice. Hosted by Huw Edwards, the BBC will be focusing on how the election affects local areas and its overall change to the political landscape.

Joining Huw is Andrew Marr, Nick Robinson, Andrew Neil and a host of other well-known presenters.

You can catch the action on BBC One from 9.55pm as it happens or use the app BBC iPlayer.

ITV:
ITV has gone all in on big-name MPs (and former MPs) for its coverage, recruiting the likes of George Osborne, Ed Balls and Ruth Davidson. The team will be split down the middle of both left and right wing commentators giving a balanced discussion of the results as they happen.

Head over to ITV at 9.55pm to catch the action or use the ITV Hub app.

Sky News:
Sky has recruited the guest star of John Bercow – the former Speaker of Parliament – for some political discussions on the election. He will be joined by host Dermot Murnaghan, political editor Beth Rigby and a number of other key members of the Sky News team.  Want to catch the Sky coverage? Head over to Sky on your TV or use the Sky Go app from 9pm.

Channel 4:
Finally, Channel 4 seem to be aiming for a mix of information and fun, bringing in guest hosts Katherine Ryan and Rylan Clarke. They will be joined by Clare Balding, Tom Watson and Amber Rudd.

Channel 4 has a history of bringing in comedians for the show and aims for an alternative outlook on the events.

For watching the Channel 4 coverage, your options are either Channel 4 on TV or the All4 app. The time to tune in for Channel 4 will be 9.55pm.

TVPlayer.com:
Not a single channel covering the event, TVPlayer is instead a streaming service which will allow you to watch any of the above shows from one place – nice and easy!

Watch the General Election online anywhere else in the world for free:

Living abroad or away on holiday when the election is going on? If you try and watch footage, you will likely find that it is geo-blocked. However, there is still a way to watch it.

While away, you can tune in and watch election coverage on any of the above news channels via a VPN. A VPN allows you to alter your IP address to make your laptop, mobile, tablet or even TV appear like they’re back in the UK, allowing you to live stream the General Election coverage from abroad.

Installing a VPN to watch the General Election online is simple:

1. Download and install a VPN
We’ve tested all of the major VPN services and we rate ExpressVPN as the absolute best. It’s compatible with all of your devices, supports most streaming services and ranks amongst the fastest. You can even install it on devices like an Amazon Fire TV Stick, Apple TV, Xbox and PlayStation, making it perfect for catching all of the election footage from wherever you are in the world. It also has fantastically helpful 24/7 live support, which is ideal if you find yourself struggling.

ExpressVPN comes with a 30-day money back guarantee and if you click here you can get 49% off and 3 months free, too.

2. Connect to the appropriate server location
All you have to do is open up your chosen VPN app, hit ‘choose location’ and select anywhere in the UK, making your IP appear like it is back home.

3. Go to your chosen channel
Finally, head on over to your chosen news or streaming site to watch the General Election online as it happens live. Or, as we mentioned above, TVPlayer.com is an excellent service for live streaming any of the channels mentioned.

What is a General Election?

A General Election is a vote that typically occurs once every five years. This vote determines a few things – which party will take lead of the government, who will become Prime Minister and which MPs will take charge in each constituency.

There are currently 650 MPs in the UK parliament, who are split across a number of political parties, a General Election determines how much of a hold each of these parties has on local and national government.

How does the General Election work?

During any General Election, the UK’s voting public is invited to select one MP from their local constituency. Each of these MPs then represents their local area while also holding a seat in the House of Commons.

The UK uses a ‘first past the post’ voting system. This means that the MP that receives the most votes will take a constituency and a seat in parliament. However, the overall number of votes a party receives across the country doesn’t count to anything and it is simply a count of how many MPs become elected.

Any party can lose or gain seats and one party must gain a majority number of seats in an election or be forced to form a coalition with another party to make up the numbers.

While most people are able to vote, there are a few exceptions. Anyone aged 18 or over can vote, as long as they are registered and a British citizen or qualifying citizen of the Commonwealth or Republic of Ireland.

Who is the favourite to win the General Election?

While there is no definitive way to work out who will win the election, the current likely winner is the Conservatives. They have held leadership for a number of years and currently, almost all polls have them as the winning party, with some even suggesting they will manage to secure enough seats to win a majority in parliament.

What were the results of the 2017 General Election?

The 2017 General Election came out with some interesting results. While the Conservatives did win, they ended up losing their majority, leaving them needing a coalition government which they formed with the DUP.

While the Conservatives lost seats, dropping from 330 to 317, Labour ended up securing the largest win of all of the parties, gaining a 30 seat increase.

How often is the UK General Election?

Typically, a General Election will occur once every five years to avoid a single party having power for too long. However, there are a few exceptions to this rule.

They can occur earlier than the above-mentioned five year period (like what we are experiencing right now). This can be due to a vote-of-no-confidence in the leading party, a motion approved by two-thirds of parliament or a proposal from the Prime Minister to rearrange the date.

Hold up: one of the best gaming SSDs is nearly half off on Amazon