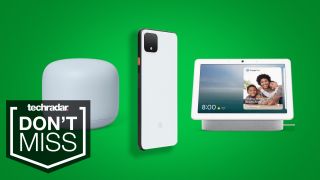 Looking for Cyber Monday deals on Google’s latest and greatest devices? We’ve rounded up the best Google Cyber Monday deals that you won’t want to miss – and many of these deals will either sell out fast or will end at midnight on Monday December 2.

On this page we’ve picked the best Cyber Monday deals we’ve found for Google’s new devices, so you don’t have to waste time searching for the deals you’re after – let us do all the hard work so you can get buying!

Not in the US? Scroll down for Google deals where you are…

Google Pixel 4 64GB: $599 at Amazon
Amazon has cut the price of Google’s latest smartphone by a huge $200 for Cyber Monday. You can get it in either Just Black or Clearly White color options. This is a great deal for an amazing handset with one of the best cameras you’ll find on a smartphone right now.
View Deal

Google Pixel 4 XL 64GB: $699 at Amazon
Fancy a larger version of Google’s best smartphone? Amazon has also cut the price of the XL model by a huge $200 as well for Cyber Monday. You can get it in either Just Black or Clearly White color options.
View Deal

Google Pixel 3a 64GB: $249.99 at Best Buy
Best Buy has a brilliant deal on the Google Pixel 3a, the slightly older handset from Google. This deal knocks $150 off the price of the unlocked model – as long as you activate it straight away. Otherwise, the price is slightly more expensive at $299.99.
View Deal

Google Pixel 3a XL 64GB: $329.99 at Best Buy
You can also get the bigger version of the handset from Best Buy, again with a $150 saving if you activate it straight away. With an octa-core processor, 4GB of RAM and large 6-inch OLED screen, this remains a powerful smartphone despite its older age.
View Deal

Google Home Mini (Chalk) Frozen 2 Book: $19 at Walmart
The perfect Christmas gift idea for Frozen fans, you can get the Google Home Mini and the Frozen 2 Book on sale for $19. The Google Mini on its own normally retails for $49, so with this deal, you’re saving $30 and getting access to sound effects and music when you read the book out loud.
View Deal

Google Home Smart Speaker: $49 at Walmart
You can save $50 on the Google Home smart speaker a Walmart. The powerful speaker delivers a rich, full sound and is powered by the Google Assistant and can play music from services YouTube Music, Spotify, Pandora, and more.
View Deal

Google Home Max: $199 at Walmart
The Google Home Max speaker gets a $200 price cut at Walmart. The smart speaker produces a powerful sound with deep bass and crystal-clear highs and works with the Google Assistant for voice control.
View Deal

Google Nest Wifi (Router & Point): $229 at Google
Save $40 off the new Google Nest Wifi kit. This bundle includes a router and a secondary unit that you can place elsewhere in your home to maximise Wi-Fi coverage. Great for large homes.View Deal

Google Nest Wifi router: $149 at Google
If you don’t need the extra coverage, Google has cut $20 off the price of the Nest Wifi Router on its own. This is a more affordable option for small and medium-size homes.View Deal

Google Nest Learning Thermostat: $179 at Walmart
Get the best selling Google Nest thermostat on sale for $179 at Walmart’s Black Friday sale. The learning thermostat can program itself and automatically turns itself down when you’re away to avoid heating or cooling an empty home.
View Deal

Google Nest Cam Indoor Security Camera: $159 at Walmart
You can save $40 on the Google Nest Cam at Walmart. The indoor security camera lets you check in on your home 24/7 with live video that you can check from your phone.
View Deal

Many of these deals will end when Cyber Monday does, so if you see any that take your fancy, don’t hang around. Some of these are also selling out fast.

Not in the US? Here’s our pick of the best Google device deals where you are: