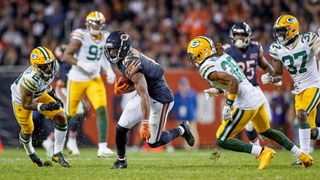 As the regular season comes to a close in just two weeks, all eyes are on the playoffs and this weekend you’ll get to see the Chicago Bears take on the Green Bay Packers at Lambeau Field. This is a game you won’t want to miss as the Bears and Packers have the longest continuous rivalry in the NFL. We’re here to make sure you catch every minute of today’s game – see how to get a Bears vs Packers live stream regardless of where in the world you are.

Chicago Bears vs Green Bay Packers – when and where?

The Chicago Bears will face off against the Green Bay Packers at the 80,000 Lambeau Field in Green Bay, Wisconsin.

Chicago is going into today’s game 7-6 after suffering a series of losses during weeks 5-9. The Bears did manage to triumph 24-31 over the Cowboys last Thursday thanks to a strong performance during the second quarter when wide receiver Allen Robinson scored two touchdowns and placekicker Eddy Pineiro scored a 36 yard field goal. The team is currently in third place in the NFC North and while they’re technically still alive for the NFC North title, a wild card spot is more likely.

Green Bay on the other hand is having an exceptional season and the team is going into today’s game 10-3. Last Sunday the Packers defeated the Redskins 20-15 by taking the lead early on in the first quarter with running back Aaron Jones and tight end Robert Tonyan both scoring touchdowns. Green Bay’s offense will have to pull out all the stops if they hope to defeat the Bears’ defense which has given up the fourth-fewest points in the NFL this season.

Whether you’re a Bears fan in Chicago, a Packers fan in Green Bay or just want to tune in to see one of the best rivalries in the NFL – we’ll show you how to get a Bears vs Packers live stream regardless of where in the world you are so you don’t miss a single touchdown.

But if you’re somewhere else in the world – or if a coverage blackout is stopping you from watching in the US – then there’s still a way you can live stream the Bears vs Packers  online (and you don’t even have to slum it with a grainy, illegal feed you’ve found on Reddit). Instead you could use a VPN – or Virtual Private Network – to change the IP address to one in a different state or country which does have a stream. And it’s not even hard to do.

How to watch the Bears vs Packers in the US

If you live in the US and have a television, you’ll be able to watch this NFL game as it airs on Fox. The network will show today’s Bears vs Packers game at 1pm ET / 10am PT and you can also stream this game on mobile using the Fox Sports app but you will need to login using the credentials from your cable provider.

Don’t want to pay for an expensive cable TV subscription just to watch the NFL this season? No need to worry as there are now a number of different streaming services available, all at different price points, to help you watch this game. We’ve even listed a few of our favorites below to make things easier for you.

How to stream Packers vs Bears live in the UK

If you want to follow your favorite NFL team all the way to the Super Bowl this year, then your first option should be NFL’s International Game Pass as it allows you to watch every regular season game for £143.99 or just 50p per game!

Unfortunately it looks like Sky Sports won’t be showing today’s Bears vs Packers game which makes Game Pass your best option to watch it.

While TSN will show a number of NFL games on TV in Canada this year, unfortunately the network won’t be showing today’s Bears vs Packers game.

Thankfully the streaming service DAZN has you covered and you can even try it out yourself to watch today’s game online, on mobile and on your favorite streaming devices as it supports Apple TV, Chromecast, Amazon Fire TV, Android TV, Roku, Xbox One and PS4. It costs $20 a month or $150 per year but there is a FREE TRIAL available if you want to give it a try to watch the Bears vs Packers.

If you’re a die-hard American football fan that even wants to watch the NFL games that aren’t broadcast in Australia, then you need to know about the International Game Pass. It’s the obvious first option that will let you view all regular season games for AUD274.99.

You can also watch today’s Bears vs Packers game on Foxtel starting at 5am AEDT on Monday as the network shows NFL games via ESPN. However, you will need Foxtel’s Sports Package to watch it and you can also stream this game on mobile using the Foxtel Go app.

Falcons vs 49ers live stream: how to watch today's NFL football 2019 from anywhere