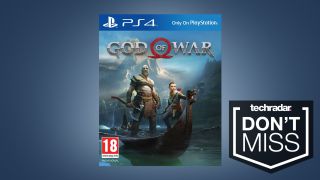 Amazon currently has a Black Friday deal that’ll blow you away if you’re an avid PS4 game fan – there’s currently a PS4 game sale that brings the price of some of the best PS4 classics to an impressive $9.99.

That’s part of the Amazon Black Friday sales, bringing beloved PS4 exclusives down from $19.99 to only $9.99. This PS4 game deal is amazing – at less than $10, you’ll probably be spending more on snacks for your gaming session than on the game itself!

This Black Friday gaming sale includes God of War, Horizon: Zero Dawn, Uncharted: The Lost Legacy, Nioh and more, so if you’re an avid gamer that needs to flesh out their library, or you just see a game here you wanted to play, these are fantastic prices and you should jump at the deals.

God of War: PlayStation 4 | $9.99 at Amazon
God of War is one of the most popular exclusive games available on PS4, and now you can play it yourself for less than $10. We could be seeing a sequel soon, so get yourself on this great deal to prepare.View Deal

Horizon Zero Dawn Complete Edition: PlayStation 4 | $9.99 at Amazon
Get yourself the complete edition of one of the PS4’s most distinctive exclusives, Horizon Zero Dawn, for this fantastic low price. Like God of War, we’re expecting a successor to this any day now, so make sure you’re caught up on the world by grabbing this great game in the Black Friday sales.
View Deal

Uncharted: The Lost Legacy: PlayStation 4 | $9.99 at Amazon
This is a spin-off to the hugely popular Uncharted series that was equally critically acclaimed, although perhaps didn’t see as much audience recognition. If you’re a fan of action or adventure games, this half price deal is a bargain.
View Deal

The Last of Us Remastered: PlayStation 4 | $9.99 at Amazon
One of the most popular PS3 games of all time was swiftly remastered for PS4, and now you can play it for super cheap. A sequel is just around the corner too, so now is the perfect time to get on board with the franchise.
View Deal

Nioh: PlayStation 4 | $9.99 at Amazon
If you like Dark Souls-style games, then Nioh is a gem you may have missed – but thankfully you can grab it for less than $10 now! Bear in mind, PlayStation Plus subscribers can pick this game up for free until December 3, so don’t buy it if you don’t need to.
View Deal

Infamous Second Son: PlayStation 4 | $9.99 at Amazon
This was one of the PS4 launch titles, but it’s still pretty popular, which is why it’s taken so long to go down in price to less than $10. It’s a super superhero game that’s expected to sell out quick.
View Deal

Not in the US? Here are the best prices on some of these PS4 games in your region.